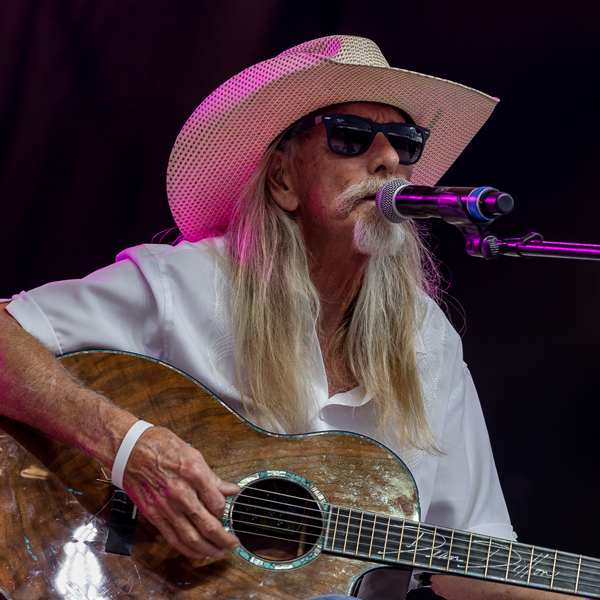 Country Music Hall of Fame Inductee Dean Dillon is one of the most iconic Country Music Songwriters of all time. One of the most successful and influential songwriters in country music, Dean Dillon served as a primary source of hits for George Strait. Dillon’s hard-edged style and creative melodies suited Strait’s affinity for traditional country. In 1981, Dillon and Frank Dycus wrote Strait’s first hit single, “Unwound.” Since then, Strait has recorded more than sixty Dillon compositions, including “The Chair,” “Ocean Front Property,” “Famous Last Words of a Fool,” “If I Know Me,” “I’ve Come to Expect It from You,” “Easy Come, Easy Go,” “The Best Day,” and “Here for a Good Time.”

Although it was writing songs for others where Dillon’s future lay, the young singer was hell bent on making it as a recording artist. Between 1979 and 1981 Dillon released 12 singles for RCA Records.

Three of the songs reached the Top 30 on the country charts, including “Nobody in His Right Mind Would’ve Left Her,” which climbed all the way to number 25 (and later became a number 1 hit for George Strait). Between1979 and 1983, as an artist Dillon charted eight times and broke the Top 30 with “I’m into the Bottle (To Get You out of My Mind).” He also wrote hits for other country stars like the 1983 George Jones number 1 hit “Tennessee Whiskey”. These successes established Dillon as a performer and as a songwriter. It wasn’t long until Dillon was paired by RCA Record head, Jerry Bradley, with Gary Stewart, the “King of the Honky Tonkers.” The vices of the two men fed off of each other and while their two bleary, good-timing albums were successful and looked like hard-living prototypes to Brooks & Dunn, (especially 1982’s Brotherly Love), the partnership had little use for the straight and narrow. After “Those were the Days”, Dillon took a five year hiatus from recording, cleaned up his personal life and concentrated on songwriting. He wrote or co-wrote a number of hits during this period and had considerable success with George Strait, who took five of his songs to the charts between 1981 & 1988. The exposure landed Dillon a new contract with CAPITOL RECORDS, who released two Ricky Scruggs produced albums, Slick Nickel and I’ve Learned to Live. The later featured a Tanya Tucker duet “Don’t You Even Think About Leaving.” Dillon next signed with ATLANTIC, where he issued his most successful album. It was 1991’s Out of Your Mind which referenced the hard country of Dillon’s heroes, but it also flirted with pop. The LP was lauded as a throwback, an answer to Nashville’s penchant for vapidity.

In 2002, he was inducted into the Nashville Songwriters Hall of Fame (along with Bob Dylan and Shel Silverstein). Early the following year Dillon signed a songwriting contract with Sony/A TV Tree, which came after his fifteen year relationship with Rose Acuff, a publishing company Sony acquired in July 2002.

Dean Dillon’s songwriting has thrived. He has recently written songs for famous faces like Kenny Chesney, Toby Keith and Lee Ann Womack. His association with George Strait over the years has brought him to an ICON STATUS in country music. It’s the relationship with Strait that has, to a large extent, defined both of their careers. And in a genre built on great songwriters writing for great singers, there has never been another team like it. Dillon has composed or co-written 63 songs for Strait, including 19 singles, 11 which went to number 1. Even in a career like Strait’s, the Dillon titles stand out: “Marina del Rey”, “The Chair”, “I’ve Come to Expect it From You”, “Easy Come, Easy Go”, “She Let Herself Go”, and “The Best Day.” His songs all pair instantly catchy melodies with gutbucket country lyrics, signature qualities of a Dillon composition that would also become hallmarks of Strait’s own style and sound.

As producer Tony Brown explained “they are the elements that allow Strait to sound traditional without sounding old-timey.